“Any useful idea about the future should appear to be ridiculous” (Dator, 1995).

Is exploring the futures of elephants through a comparative metaphorical analysis of how elephants have been historically and civilizationally constructed ridiculous?

Flying elephants emerged as a futures research concept during a guided meditation session conducted by Sohail Inayatullah at a three-day workshop following the 4th APFN conference inBangkok. Seeing chained temple elephants in India and Sri Lanka, I was seeking a way to help the Asian elephant: individually and as a species at risk. In this narrative process, I first cast the human mind as an elephant in chains probed by six blind men (five senses plus one, kinetic) as in the classic Indian fable.

Vola! A flying elephant emerged at the conclusion of the guided meditation. This was the solution to the issue of my narrative and that of framing the future. Initially underwhelmed with my right-brain’s creativity, I soon saw potential as useful metaphor for touching something we all grapple with as individuals and as futurists. Later, at Bangkok’s international airport I inspected the splendid rendition of Churning of the Milk Ocean from Hindu philosophy and how vertical-lateral-circular can be combined.

Indeed, the Asian elephant spanned back to cosmic beginnings and world creation myths. No dull, boring, lifeless western science ‘big bang beginning ’universe of particle physics seeking endless sub-particles into the quantum worlds of hypothetical imaginations as far down as research funds will permit. Rather, as ecological turtles all the way down in a dramatic creational cosmic ‘milkshake’ outlined in the Hindu Bhagavata Purana, Mahabharata and Vishnu Purana.[ii] Ok, but whence the future for elephants within a world of 10-billion humans?

The “western” rational mind requires an end-scenario to escape the endless recurrences of circular Eastern mythologies. Perhaps an ‘undramatic’ artificial intelligence (AI) singularity soft-fade into end of history scenario as Neo-Neanderthals within a new galactic adventure of Kardashev scale dimensions? Or, maybe more ecologically, a quietly melding into Karl Schroeder’s future where advanced technology is indistinguishable from nature in slow-growing cultures integrated within their natural environments? But how best to proceed with Flying Pachyderm research? It’s a long thin ‘logic’ line from chained ulcerated bleeding feet in dung at the local Hindu/Buddhist temple to the lofty realms of divine flying vehicles for the gods and artificially recreated hyper identities such as Ganesha.

In the East – the gods and cosmos

Elephants play an important role in both Hindu and Buddhist religions.Ganesh, the Hindu elephant-headed god, is revered as the remover of obstacles and the Hindu god, Indra (an equivalent of the Greek godZeus) rides a white elephant, Airavata, one of the nine navaratnas or gems churned out of the milk ocean (Krishna2010).[iii]

The Buddha often spoke about elephants and used their image and characteristics as powerful metaphors (see Buddhism) and a white elephant in his mother’s dreaming signaled his conception.

“The Dream of the White Elephant” (Source: image by Kryštof Krejča, Prague Zoo)

Elephants are represented at the dawn of creation myths and have been used traditionally in warfare and heavy industry until the introduction of large modern machinery, and religious/cultural ceremony. And yet, as Sangita Iyer, activist and filmmaker of Gods in Shackles notes: no religious texts justify torturing elephants in temples although owners can exploit elephants for up to $US 10,000 per cultural festival.[iv]

In the West – the trial and the trail

In the West elephants usually represent domains of difficulty; psychological taboos (Simler & Hanson, 2018) [v] large expensive unwanted “white elephant” things; and futures “gaps” (Bussey 2014, 2009).[vi] “Seeing the elephant”in 19th century America was a popular expression for a been there done that sentiment with a sense that perhaps it was not really worth the effort (Rea, 1969and Shindler, 1998). It often referred to harsh experiences in the Mexican–American War; the Texan Santa Fe Expedition; the American Civil War; the 1849 Gold Rush; and the Westward Expansion Trails – e.g., the Oregon Trail, California Trail, and Mormon Trail (Mathews 1951). See the New York Times (1861).

While “seeing the elephant” largely disappeared as a popular phrase during the 20th century, with the rise in American prosperity, it will be interesting to see if the phrase returns in the future as net benefits of empire decline during the 21st century. Already, in addition to the “elephant in the room” and “elephant in the brain”, we now find “seeing the elephant” applied to human-elephant relations (Scigliano, 2006) and understanding globalization (Marber, 2009).

Raw untested recruits yet to encounter serious action were said to have come to Shiloh to “see the elephant.”Eventually the elephant came to represent the Republican party in early American politics and third term panic prior to the later ratification of the 22nd Amendment in 1951 which limited re-election to two terms. 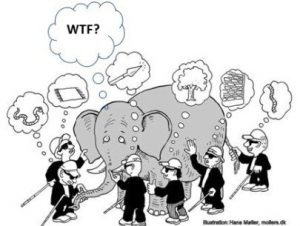 Philosophically the Six Blind Men and the Elephant fable represents as relativism and tolerance against exclusive religious claims or absolute truth, while theologically the fable looks to something bigger beyond normal human comprehension.[vii]The elephant can also be applied to children’s education as part of exercises in seeing the bigger picture (Gail Ellis).

In feminism – the ‘forgotten’

For feminists, the little-known elephant-headed goddess, Vināyakī, can represent the sidelining of the feminine. Ancient texts place Vināyakī within the sixty-four yoginis or the Matrika goddesses and the Devi Purana includes Vinayaki as the ninth Matrika (after Mahalakshmi or Yogeshvari). Generally,only seven Matrikas are depicted although nine Matrikas became popular in eastern India.[viii]Sri Lankan folk lore superstitions consider seven a lucky number while nine is held a very inauspicious number – perhaps reinforcing identity from mainland eastern India, or as a reaction to British colonial rule which left the island nation with nine provinces.  Schismogenesis, anyone?

In the Great Games – hubris and nemesis

George Orwell (1949), who shot an elephant in (then) British Burma (Orwell 1950), defined the Great Games of empire in his classic dystopian futures novel, Nineteen Eighty-Four, within which, coincidentally, his warring “disputed area” between the three supra-national blocks of Oceania, Eurasia and Eastasia) maps very closely to traditional Asian elephant habitats.[ix]

The elephant thus not only has mythological significance but its earthly plight is geo-politically relevant as an indicator of unresolved international dispute.

In small villages and farmer’s fields – anger and fear

Today, fewer than 40,000 Asian elephants exist (Choudhury et. al., 2008). Twenty percent of the world’s human population live in human-elephant conflict (HEC) zones (Jadhav &Barua, 2012,). Annually, in India approximately 400 people and 100 elephants die (through retribution) and HEC impacts approximately 500,000 families (Rangarajan et. al., 2010). Elephant related agricultural crop-loss in India of  about 1-million ha./year with between 10-15,000 houses destroyed (Rangarajanet. al.2010) and (Banerjee 2018). Indian states are affected disproportionately but on average, farming families may lose about 15% of their annual produce (Madhusudan, 2003). Much of this problem is attributed to the “absence of a science based approach to resolving the problem” (Desai & Riddle, 2015).

In Sri Lanka the tragedy of the common ground between humans and elephants is emblematic of the wider regional situation. Sri Lanka supported nearly 20,000 elephants, a 100 years ago while today it has dropped to about 5,000: “[The elephants are] angry with us. They know that we are taking their land, and they know that we’re shooting them”(Bruno, 2015).

In a future – withAsian elephants

A Zimbabwean farmer’s sense of balance between aesthetics and pragmatics portends the future: “When we have plenty to eat, elephants are beautiful; when we are hungry, elephants are meat” (Redmond 1996, p. 371).Clearly a full stomach is connected with non-HEC– i.e., economic prosperity at the pyramid base.Twenty-first century Asia’s paradoxical conundrum is how to achieve economic prosperity while retaining natural viable habitat for wild elephant – they rarely breed in captivity. Where can they go? Other than Asian elephant extinction scenarios, or lower Asian population trends, alternatives may include relocating viable Asian elephant herds – e.g., to Australian wilderness which has a proven past record for animal import policies such as rabbit, fox, camel, horse, buffalo, poisonous toads, and of course, humans. Climate change will not only create human refugees, but elephant refugees as well.

In new times – with new metaphors

Perhaps the way to save the Asian elephant is create excitement amongst the youth. If we do not, then seeing “the elephants” for children in the late 21st century maybe little more than just an App. The challenge is to discover integrating meta-patterns and ecologically sustainable visions for the many disparate elephant metaphors. In this we all stand as the six blind men and women feeling our way forward – transforming our imaginations like Deng Xiaoping’s China: “crossing the river by feeling the stones” (Vogal2001). Hopefully our crossing the 21st century future Anthropocene is not by feeling the extinct elephant’s bones instead! Indeed, elephants can fly, with a little help from our imaginations. The futures “gap” question is: Where to in the Anthropocene 1.0?

Russell Clemens was born in the last days of 1955 and is now described by the young as ‘old’. He is now in retirement and capitalizing on a lifetime of variety largely spent (and sometimes misspent) at the closing edges of the 20th- and the dawn of the 21st-centuries by commencing a PhD programme in Futures Studies at the University of the Sunshine Coast (USC), Queensland. The topic is related to the futures of the elephant — primarily in Asia. He can be contacted by email at: russell.clemens@research.usc.edu.au.